“Western European Banking Groups in East-Central Europe: A Preliminary Overview” is a title of a joint paper with Dr Dal Maso which I delivered at the 6th FinGeo Global Seminar in São Paulo, Brazil (Dal Maso and Sokol, 2019). Our paper was part of a special session on ‘Finance and uneven development in Eastern Europe’, which also included three other conference papers by the GEOFIN team. Our paper provided a preliminary overview of a banking transformation in East-Central Europe (ECE) that had opened the gates for the financialisation of the region. The paper highlighted the fact that, following the collapse of state-socialist regimes in ECE, a dramatic ‘transition’ of the entire region towards a market economy had begun in 1990s. This included a wholesale transformation of banking systems that were previously geared towards completely different societal aims. State-owned ‘monobanks’ were abandoned in favour of a market-oriented banking system involving an independent central bank and a range of commercial banks. This transformation was further encouraged by the EU accession process, which most ECE countries completed by 2003. All this resulted in ECE becoming a region with the highest level of foreign ownership of the banking sector in the world. Indeed, by early 2000s, foreign ownership of bank assets was well over 70% in most ECE countries, with some countries (e.g. Estonia) displaying near 100% foreign share of ownership (see Fig. 1). The only country that bucked the trend was Slovenia, which saw only very slow increase of foreign bank asset ownership. The 2008 financial crisis seem to have halted, and in some cases reversed, the growing dominance of foreign banking capital in several ECE countries, but the region’s banking sector remains heavily foreign-owned. What is striking, is that the foreign banks that came to dominate ECE region are, with few exceptions, Western European. Indeed, it could be argued that the Western European banking groups became a driving force in the financialisation of post-socialist ECE, not least through a dramatic expansion of credit to East European households (which in some countries have continued despite the global financial crisis). Our paper thus offered a preliminary overview of the penetration of the major Western European banks in East-Central Europe. In doing so, it also highlighted a particular parent-subsidiary structure that characterizes the operation of Western-European banks in ECE. It could be argued that these parent-subsidiary arrangements form part of wider ‘financial chains’ (Sokol, 2017) – linking the West-European core with the ECE semi-periphery and reshaping uneven development in Europe. 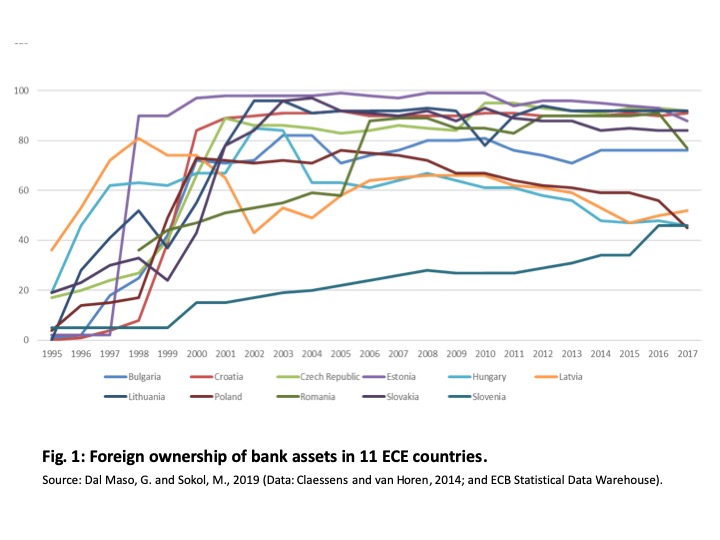 GEOFIN Blog #6 – Financialization of the State: Preliminary Analysis for...
Scroll to top
We use cookies on our website to give you the most relevant experience by remembering your preferences and repeat visits. By clicking “Accept”, you consent to the use of ALL the cookies. However you may visit Cookie Settings to provide a controlled consent.
Cookie settingsACCEPT
Manage consent