You are here: Home1 / Blogs2 / GEOFIN Blog #15 – Degentrify.Europe seminar in Berlin (by Zsuzsanna...

I participated in the workshop of the freshly established Degentrify.Europe network in Berlin between the 21-23rd of October 2021. The network was established by different initiatives engaged in anti-speculative real estate projects in Brussels, Riga, Rennes, Berlin and so on. Most of them have been engaged in the social-purpose temporary use of abandoned buildings, and have developed quite successful mechanisms that match urban vacancy with social initiatives’ need for space. However, they have come to a point where they aim to build structures that are able to take the buildings off the market in the long term, and which provide stability to the initiatives and residents occupying the buildings. In practical terms, this means buying the buildings with some kind of anti-speculative structure. In order to learn about the possibilities for anti-speculative buyout, the network was expanded with initiatives who have experience in this field (such as community land trusts or cooperative housing initiatives). Also, the Berlin location was chosen because of the high number of alternative real estate projects in this city.

During the workshop, we had a number of site visits to inspirational Berlin-based projects (photos and short descriptions of these follow below), learned about the work that each of the participants does, and also had discussions about the possible legal-institutional models, as well as potential financial mechanisms for anti-speculative real estate. Concerning the legal-institutional issues, we had support from a member of the Mietshäuser Syndikat (one of the most famous anti-speculative housing networks), and for the financial questions we were given input by a representative of the GLS Bank (the main ethical bank in Germany).

What was perhaps missing, was a more in-depth discussion of the potential role of the public sector in countering gentrification processes. I think it is definitely worthwhile to reflect on how bottom-up, community-controlled initiatives for alternative real estate can be scaled up, and in what ways they can collaborate with the state (local or national) in order to make their achievements accessible more broadly. On the other hand, it was emphasized by the initiatives from Berlin, that due to the earlier strategy of the local state to sell out all properties, they do not necessarily have trust towards this not happening again. This was one of the reasons why many initiatives aimed to transfer real estate into anti-speculative legal structures that are independent from the state. This is an experience that organizations in Eastern European countries can easily relate to, due to successive waves of privatization since the 1980s. 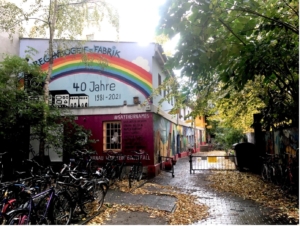 This is one of the oldest initiatives. It was established in close collaboration with the city in two different ways:

– One part has working spaces and community spaces (photo above). This was (and remains) in the ownership of the city, with the collective only managing it in the long term.

– The other, residential part was owned by a private owner until recently, and the residnts had renovated it with the help of a grant from the city in the 1990s. The grant scheme aimed to restore abandoned buildings and in return, the owner had to give the organization of the tenants a 25-year contract. This expired recently, and with the help of foundation (Stiftung trias) the cooperative of the residents managed to buy it. 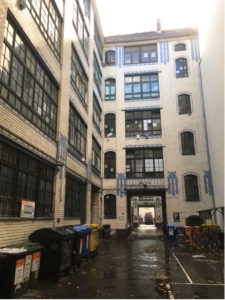 This is a working space, that was recently meant to be sold off by its owner to create luxury housing. The collective of the tenants organized themselves and managed to pressure the owner to sell the building to them instead. The land was bought by the city and the building by the collective of tenants, who will pay a land rent to the city. 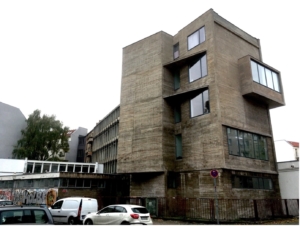 This former printing house (now also a working space and cultural space) is owned and managed by its tenants since 2007. Owned by the city after the bankruptcy of the printing company, they wanted to sell it to investors in the years before the financial crisis. After years-long negotiating and political pressuring, finally the collective of tenants managed to buy with the help of two foundations (Stiftung trias, Stiftung Edith Maryon). 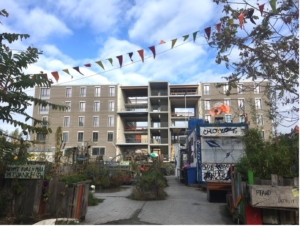 This is a very interesting new project of the TRSFRM real estate development cooperative in the area of Vollgut, a large area being transformed in Neukölln. Apartments of the building will be contracted to different social organizations, who work with different target groups in a difficult housing situation (such as single mothers, those coming out of shelters, drug users, etc). These organizations will also become members of the cooperative owning the building, and land on the site is owned by the municipality. 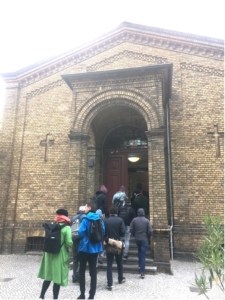 Some neighborhood initiatives use churches for their community activities, and church property is also being considered for housing purposes in the city. For these projects to become feasible, progressive local churches are needed. 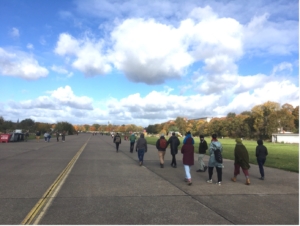 This former airport was the subject of much debate and contestation – the main lines being whether to have new real estate development on the site or preserve it as a green area. Finally, as a result of citizen organizing, the latter one, and today it is a park (there are also some community gardens).

GEOFIN International Seminar with Fabio Contel “The financialization of the...
Scroll to top
We use cookies on our website to give you the most relevant experience by remembering your preferences and repeat visits. By clicking “Accept”, you consent to the use of ALL the cookies. However you may visit Cookie Settings to provide a controlled consent.
Cookie settingsACCEPT
Manage consent