The 6th FinGeo Global Seminar in São Paulo, Brazil (15-17 May 2019; http://fingeo2019.com/en/home/) included a session on ‘Finance and uneven development in Eastern Europe’. I prepared a paper titled “Chaining Households to Financial Markets: Micro-level Interest-Bearing Strategies of Western Banks in Croatia“ (Rodik, 2019a). While I was unable to travel to São Paulo myself, I am very grateful to my colleague and friend Marek Mikuš kindly presented the paper on my behalf.

Building on my previous qualitative and quantitative research of the Swiss Franc mortgage crisis in Croatia (2011-2015) (see Rodik & Žitko, 2015; Rodik, 2019b) and employing the concepts of “financial chains” (Sokol, 2017) and interest-bearing capital (Becker and Weissenbacher, 2007; Becker et al., 2010), my argument in this paper revolves around three claims. The first is that the Western banks complemented their macro-level interest-bearing strategies in East-Central European (ECE) context (such as currency carry trades) with particular interest-bearing strategies at micro-level. These strategies revolved around the task of encouraging households to borrow while at the same time providing them with exploitative mortgage contract terms. Second, within the set of interlocking relations thus established – the financial chains – banks acted as intermediary links, or chains, between households and financial markets. Third, chaining the households to their mortgage contracts. Mortgages, as a long-term form of debt, enable a long-term and steady stream of payments to banks and makes interest-bearing strategies profitable. But the interplay between macro and micro-level interest-bearing strategies is rather unexplored. After a brief Introduction, providing the key figures on household debt in Croatia, I addressed two main questions. First, what strategies banks used to “chain” households to their mortgages? Second: what strategies banks used to enable a steady profit extraction from households. 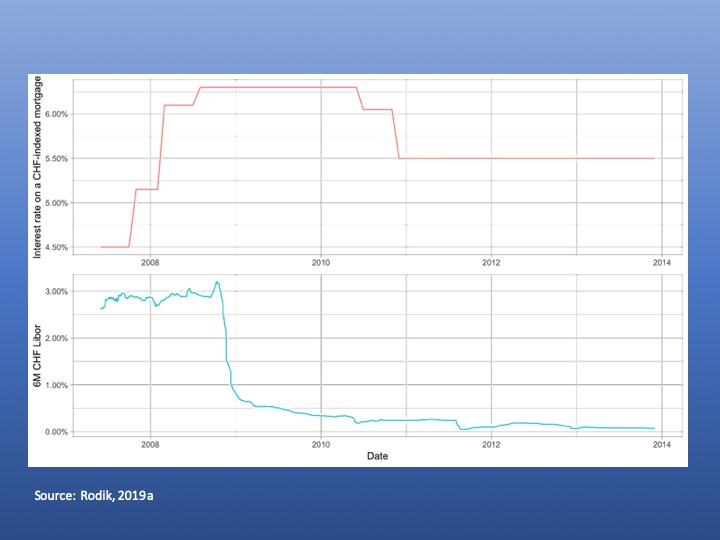 Click Here
GEOFIN Blog #2 – Contestations of the financialization of housing in Croatia...

GEOFIN Blog #4 – Public debt, capital flows and financialization of the...
Scroll to top
We use cookies on our website to give you the most relevant experience by remembering your preferences and repeat visits. By clicking “Accept”, you consent to the use of ALL the cookies. However you may visit Cookie Settings to provide a controlled consent.
Cookie settingsACCEPT
Manage consent